The New York Metropolitan Opera is mounting a “fully interactive” staging of Berlioz’s “Damnation de Faust,” which tests technology that they plan to deploy in a production of Wagner’s Ring cycle in the 2010-2011 season. This is one of the finest fruits yet of Peter Gelb’s new tenure as general manager of the Met. The director is Robert Lepage, who in addition to having directed Lorin Maazel’s opera “1984,” Stravinsky’s “The Rake’s Progress” (at the Royal Opera at Covent Garden), Bartok’s “Bluebeard’s Castle,” and Schoenberg’s “Erwartung,” also directed Cirque du Soleil’s Las Vegas production “Kà.” The tech team is the German software artist Holger Förterer and video artist Boris Firquet. 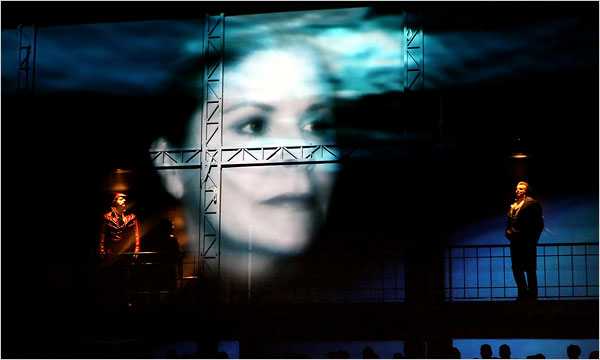 While the opera is being performed, laser sensors and microphones track the movement on the stage and the swell of the music to control images of birds and flames on screens behind the performers, all rendered in real-time.

This is so my idea. I have witnesses. But since no one’s lining up to ask me to direct an opera, I’m going to give away the rest of my idea for free. Ever since I saw the Lord of the Rings trilogy (which I despised for its cloying sentimentality), I’ve been thinking, why not merge the motion capture technology that allowed Andy Serkis to don sensors and virtually act the part of Gollum, wearing his 3D model like a rubber suit, with the technology we use everyday to render fantastic real-time realms in videogames?

Having experienced Seattle Opera’s Der Ring des Nibelungen cycle back in 2001, I specifically had Wagner in mind. One of the challenges in mounting the Ring is deciding how to present the dragon Fafner in Siegfried (the third opera in the cycle). What if, instead of a big, floppy puppet, the audience could behold a singing creature from the alien menagerie of Gears of War 2?

You could have the singers performing somewhere out of sight, with cameras capturing their facial expressions as they sing, to be mapped onto the face of the virtual characters projected on the screen. Meanwhile, another actor (also off-stage) performs the physical action that’s mapped onto the rest of the character’s body, Gollum-style, but in real-time. It’s like multiple people manipulating a huge dragon puppet, but with no physical constraints or cost for the materials.

Not only does this allow for some fantastic operatic creatures (from Fafner the Dragon to Seth Brundle in Howard Shore’s recent opera The Fly), but it might also have saved Deborah Voigt from having to have gastric-bypass surgery. Set designers could benefit from a vastly increased palette of new possibilities, from anime to totally abstract. And of course the virtual sets would be completely dynamic, from the birds and fire of this Faust production, to characters leaving footsteps on terrain and swirls in volumetric fog, particle systems, weather, dynamic lighting, the whole arsenal of what’s already used to create compelling environments in videogames.

This is absolutely the evolution of the operatic medium. Even if the technology’s not quite ready to render Jurassic Park in realtime, it won’t be long. In an article about videogame music a few years ago in the Seattle Weekly, Gavin Borchert even called videogames “The New Opera.” If Wagner were alive today, seeking to pursue his vision of an all-encompassing gesamtkunstwerk, he would surely be casting his gaze towards games.

By the way, I’ve also always thought that Die Zauberflöte would make a great game. That’s not necessarily the evolution of any medium, but wouldn’t that be a fun project?

1 thought on “Interactive Opera: The Met Steals My Idea”